Stirlin initially announced their one-year commercial partnership with Steven, ahead of his first snooker tournament of the season back in September.

After securing a place on the World Snooker Tour earlier in the year, Steven has since played in several major tournaments amongst the top 128 players in the world, achieving a top 32 finish in last month’s English Open.

Tradeglaze have now agreed to sponsor Steven throughout the upcoming UK Championship tournament, which will take place between Monday 23 November and Sunday 6 December at the Marshall Arena in Milton Keynes.

Offering an attractive top prize of £200,000, the UK Championship is one of the most prestigious ranking tournaments in professional snooker, alongside the World Championship and the Masters. 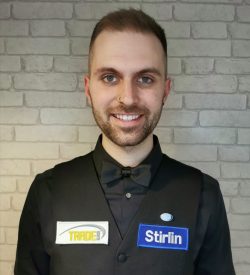 Jeremy Wetherall, Managing Director of Tradeglaze says, “We are delighted that we can, together with the fantastic team at Stirlin, support Steven in the forthcoming UK Championship snooker tournament. It’s great to see local talent flying the flag for Lincolnshire and Steven’s journey of hard work and commitment is remarkable. Our team here at Tradeglaze are all very excited to see him play next week and keep working towards his dream with what is an incredible amount of passion and dedication for the sport.”

James Kirby, Director of Stirlin says, “As one of our trusted supply partners, we reached out to Tradeglaze to ask if they’d be interested in supporting Steven in his upcoming tournament and we were delighted when they said yes. Steven is the only person from Lincoln to ever qualify in professional snooker, so it’s great to have another local business on board cheering him on and helping him progress even further.”

Expressing his gratitude for the support, Steven says, “It’s amazing to have the support from Tradeglaze for the upcoming UK Championship tournament. After Stirlin made the initial one-year commitment to me for the season, I am so grateful to now have further support from another respected local business.”

“The support will allow me to concentrate solely on the practise and preparation for the upcoming tournament and will importantly assist my snooker progression. It gives me a huge amount of confidence knowing I have the backing of local people and gives me that extra drive to succeed. I look forward to getting stuck in and hope to continue my good run of form so far this season.”

Steven will play World Number 19 Anthony McGill on Thursday 26th November at 7pm, which will be live streamed on Eurosport here.